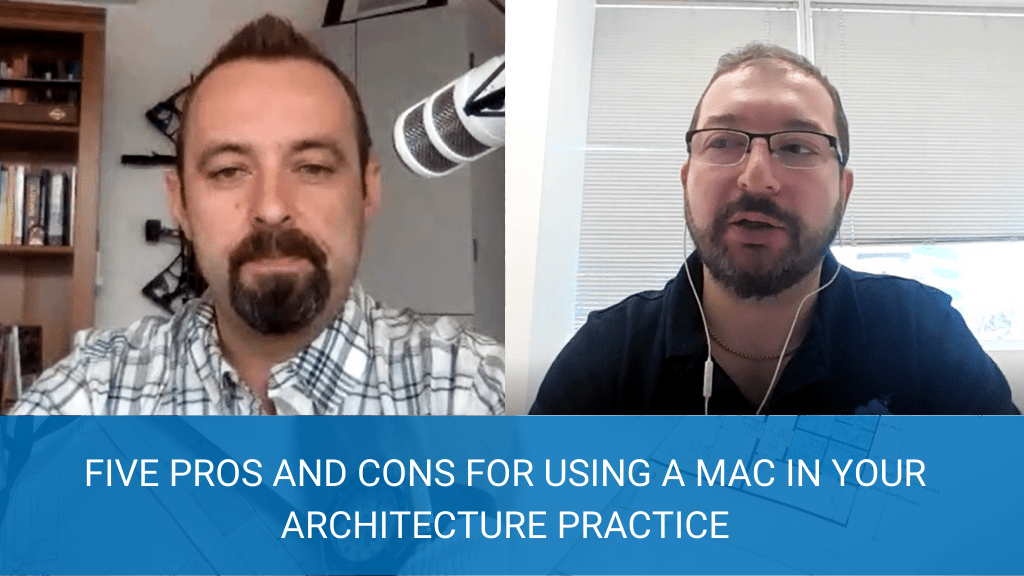 Here at ArchIT, we provide IT services for AEC firms, supporting both Mac and PC.  As such, we get a lot of questions about whether the customer should get a Mac as their next computer. A lot of people use Mac for personal use, but keep a PC for business. Alex is a lifetime-Mac user and Boris is a lifetime-PC user.  In Alex’s personal opinion, Mac wins, but you can make that decision after we are finished presenting both sides.

PRO: The Mac is (1) easy to use; (2) fast and responsive and (3) aesthetically pleasing. We want to put our hands on that Mac keyboard. The mouse moves fast. With Mac, the overall user experience is number one.

CON: Boris has been using a Mac as well, but not for business stuff. The PC has come a long way.  The Windows 10 operating system (and Windows 11 is coming out soon) is all the things we just mentioned.  They feel very similar as far as the design of the user interface. Boris has been using a PC since Windows 3.1 days and he is used to all of the quirkiness of it. Plus, Microsoft has been designing the user experience so that the apps are at the center of the experience. This is like what Mac has been doing for all these years. It’s the apps that drive the user experience and not necessarily the operating system itself. Apple has been trying to get the operating system out of the way for years.  Windows is catching up in the user experience. It is also more difficult to use Mac in a business setting.

When you are using a Mac as a single person or maybe a family, everything is synchronizing nicely using your iCloud accounts. However, when you take that on a business side, it is completely different.  You still need to utilize third-party applications. You can’t just use iCloud to sync everything. Your employees may not have iCloud accounts and it is not as secure.  It is basically a consumer-grade product. You can set different permissions, but there is more difficulty with using these tools in a business setting. For instance, file sharing, with a Mac, you can share files with everyone, but you can’t set certain permission. Things like that become more difficult to help you segregate your business life and personal life.

One example is your photos sync to your iCloud and then the centralized IT has access to all your personal photos.  That is a drawback of being a Mac user. Privacy and security are a big deal. You don’t want to have your personal data cross over into your business side. You may also experience other issues if your kids delete or install something. Using a Mac is more difficult in a business setting.

Those are well-made points and I think we are at a tie because we talking about user experience and overall speed, which are important for productivity and aesthetics. They are also important for mindset and how it makes you feel.

PRO: Traditionally, everyone buys into the concept that security on Macs is better than PCs. Apple does a great job of, not only securing their devices but also marketing that point. That marketing is not always true because there are a few things we need to consider. Historically there have been fewer cyber-security attacks on Macs than PCs.  The reason for that is that there are fewer Macs being used in a business setting than PCs.

Obviously, they have an expanding market share, but it is still less than 40 percent.  If we corollate that, PCs have more attacks, but they are also used 80 percent of the time. You get to the same point where both devices are not 100 percent secure. Apple locks down the App Store so that it only contains content that passes through security checks. However, if people bypass the app store and search online for free tools to use, then they find themselves in a similar position as a PC user. Apple does not include any anti-virus software and doesn’t promote installing third-party antivirus software. We know to do this on a PC and it actually makes the Mac a little less secure than a normal PC would be.

CON: There is a lot of overconfidence in the Mac security. We tend to think they are superior and secure. We do not always use common sense in what we do on the internet and interacting with Wi-Fi networks, and how much we are able to trust every aspect of the tool.

In a business setting the overconfidence or lack of antivirus software can potentially lead to big problems, especially because a lot of us use cloud-based tools and Google docs.  No matter what your endpoint, you can get in trouble.

PRO: The Mac allows productivity and the right state of mind to make creative decisions in your work. Mac users typically don’t want to wait for something to download. The most frustrating thing Alex experienced with Mac is using Excel. It has to verify licensing every time the Excel app launches. It’s a 20-30 second wait and it’s frustrating.  Everything else has been incredibly reliable and stable. Occasionally Mac users must restart, but most of the time it works like a clock.

We must applaud Apple for that, but there is a specific reason for that as well. One is that the operating system is specifically designed for the hardware to run it. The Mac OS has been thoroughly tested to make sure there are no bugs or issues. If there are bugs, they are doing a great job of releasing updates quickly. In addition, as we mentioned in the App Store, there is specific software that has been verified and tested.

CON: Not all software developers (and we have a few of those instances specified in the architecture engineering and design space) want to go into the App store, pay the fees and then spend significant time and money developing things for the Mac platform. Revit is a tool that many architects use, especially for commercial projects and larger projects, and that tool is not available for Mac. There are some workarounds that people can do, which becomes more difficult.  To do so, you are basically turning your Mac machine into a Windows machine, and that defeats the whole purpose of this argument. That is our most popular video out there –– running Revit on Mac OS. This is definitely a problem.

Another tool that had a Mac version initially, is Bluebeam. The Mac version has been end-of-life because they most likely did not want to invest the resources.  Bluebeam is a PDF editor which is very popular in the construction industry. We have a couple of offices that have a PC that just sits there when they need to do Bluebeam work, because as an architect when you go for approvals from the building commission, a lot of commissions use Bluebeam as the native tool for digital approvals. You don’t have to go to the city office and stand there with drawings, you can do a digital session through Bluebeam and Bluebeam studios. You need to use Bluebeam to streamline the approval process to make it easier for you and your office. If you are a Mac-based office, you can’t use Bluebeam. You must have a PC that is there for that purpose. It makes it less efficient and less ideal for a business.

CON: It is an interesting topic. If we remember up until the most recent introduction of the M1 chip, Macs used Intel processors in all their products. Which is like what PCs have been using for a long time. The same I–5 and I–7 processors were in both Macs and PCs. To lower the costs of the devices, Apple decided to switch to an M–1 chip, which in all the benchmarks has been shown to have better performance than the standard Intel chips. They have increased the battery life and made computers perform faster, but there is a small caveat with that too. Not all application manufacturers (and even up to this point where the M–1 chip was released last November) have been able to natively incorporate M–1 support into their applications. They are using a tool called Rosetta, which is converting the application they wrote for Intel chip into the M–1 code. When that process happens, you are losing the performance gains that you would have otherwise. If it was a native application, it would probably perform much faster, but since you are using the conversion, the performance is about the same.

We’ll call this a tie.  In the future, Mac can break out from raw power and speed, but PCs are also no slouch.  They are going to be right behind it.

PRO: This is a good one. Because of all things we have discussed, it is my perception as a Mac user, I require less to no IT support to run my machine.

CON: If we are looking at using a Mac for personal home use, most likely that is the case. How many times have you gone to the Apple physical store for help? Likely not often, if ever.  But when we are talking about business, and as we talked about the additional applications that we need to run on top of our Macs to perform our business functions, it becomes more evident that there is some support required. It may not be the support with the hardware itself, but it is with how to run applications on top of that hardware. Many of the issues we faced last year, were because of the M–1 conversion mentioned previously.  For example, one application that some of our clients are using is Box as their file repository. Box worked fine with the previous version of the processor but would no longer work at all. They are only in beta right now and still do not have support for that yet. There are things like compatibility issues that you should consider.

The business owner may purchase a Mac and then discover certain applications do not work, and now there is a loss of productivity. That is where support comes in. That’s where we help our customers in making those decisions and figuring out these issues as they happen in a business setting.

We’ve heard our customers comment regarding their past IT providers, that when they have a Mac and most of their other team is on PC, the support breaks down. They submit a support ticket, then when someone calls them back and finds they are a Mac user, the tech must go and re-educate themselves or bring in their Mac expert to solve the issue. This is a clunky and annoying way to solve problems.  You have multiple touchpoints and must interrupt your day multiple times, which is a bad experience for you and your team.

At ArchIT, our support engineers learn to support both platforms 50/50.  (We are really about 60/40 but we love Mac).  We natively support Macs as well as PCS.

At the end of the day out of all these pros and cons, I think we are pretty much even.  One win, One loss, and Three tie-ups.  Either way, you will interpret this as you see fit for yourself.  If you have set your mind on Mac, we are not going to change your mind. If you choose ArchIT as your IT provider we will support you on either platform. All we do is support architecture design engineering firms so you can focus on doing your best work.

If you have questions or need help please reach out to us. ArchIT specializes
in providing IT services for architecture, design, and engineering firms.